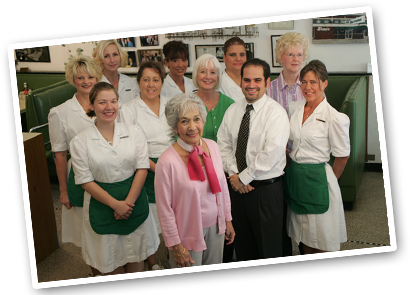 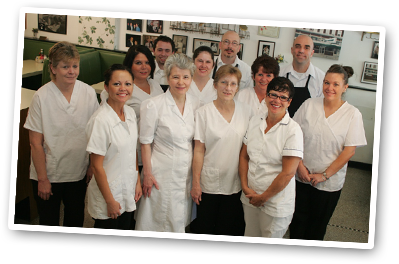 The History of Jim's

As soon as you step inside, you're overwhelmed with the aroma of freshly made spaghetti and quickly greeted by a friendly hostess. You'll be seated in a green booth, but en route to your table, you can't help but notice that the walls are adorned with photos of celebrity visitors such as Muhammad Ali, John F. Kennedy, and Billy Joel. Once seated, you're greeted by a waitress wearing a crisp, white uniform and white shoes with her hair pinned back neatly, reminiscent of days gone by. Regardless your lunch or dinner choice, you'll be served with delicious, quality food that has stood the test of time.

Being family-owned and situated in the same location for more than seventy-four years, Jim's Steak and Spaghetti House is a rare find. Now best known for spaghetti, a fish sandwich or homemade chocolate pie, Jim's was originally the spot for 10-cent milkshakes and 15-cent cheeseburgers.

It all began in 1938. Soon after their engagement, Sally Rahall looked at Jim Tweel, her husband-to-be, and declared, "Now that we're engaged, you need to find a job."

Shortly after, Jim purchased The Kennedy Dairy Store located at 920 5th Avenue, the current location of Jim’s Steak and Spaghetti House. He and Sally sold cheeseburgers, ice cream cones and milkshakes, often staying open until midnight as customers continued strolling in after late-night dances. In 1944, a man by the name of Roberto Elmoro from Italy stopped in and told Jim he wanted to help him start a spaghetti house. Using Elmoro’s original recipe and expanding the restaurant to include the room next door, The Spaghetti House opened on July 14, 1944.

No matter the name or the year, Jim’s has always been built around five facts: good service, good food, courtesy, cleanliness and ambiance. We look forward to seeing our regular customers that have remained faithful over the years and watched Jim’s develop and grow. However, we also look forward to greeting new faces and telling the story of Jim’s Steak and Spaghetti House. We hope to see you soon!